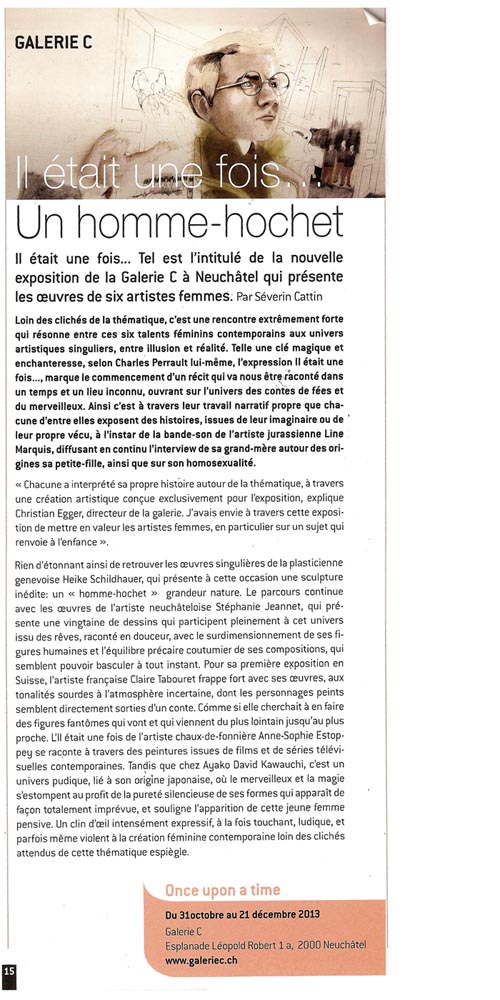 "It is to live and to stop living which are imaginary solutions. The existence is somewhere else. " Wrote Breton André in his manifesto of the surrealism in 1924. In another context, the French poet still wrote " the most beautiful present of life is freedom which lets you go out of it at your time. " Stéphanie Jeannet participates of this universe stemming from dreams, told gently, with jumps of scales, from crumpled up registers, consisted in some pencil strokes perfectly mastered in the softness of the paper. Small or monumental, her drawings have the smell of turpentine to have been qualified by shades here and there. Their colors hang on the glance, take you into the depths of a singular world. Great-granddaughter of heart of the surrealists for her taste of the irrational, Stéphanie Jeannet creates outmoded atmospheres where perspectives jostle together without complex and dare a perfect symmetry, made in any rigor of the other times. The whole gets organized in the middle of deep, lost, dreamy or distraught looks of protagonists. Never in exchange, the latter seems orphan in the middle of others and find listening only with Lilliputians who appear in micro crowds by places. What links between a rhinoceros race and rows of headed faces? Why two small pigs lost in the middle of wild grasses? And these legs? There is often a threat which reigns in her composition, that of a precarious balance who could tip over at any time. Doors opens on other doors and a mental maze emerges. Between finished and not finished, Stéphanie Jeannet's drawing is to be read as an aesthetics of surprise which privileges the unusual and the strange. In the wonderful of its drawings resounds something peculiar to the famous words of Lautréamont: " beautiful as a fortuitous meeting of an umbrella and a sewing machine on a dissection table."

The young artist Stéphanie Jeannet, which every drawing represents a world itself. Of a animation film telling the story of a man who leaves to his own discovery-a man absent to himself-misled in the society-to her drawings inviting the spectator in a fresh look, her art questions strangely the fallover of its kind. A journey not to be missed!

The unpublished work of Stéphanie Jeannet, an unclassifiable artist who benefited of a grant of the City of Neuchâtel for a stay of six months in Bruxelles. This young woman develops an original vision of the world in Gulliver, between infinitely large and small.